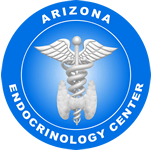 Dr. Hasinski received his Bachelor of Arts degree from the University of Cincinnati in 1984.  He went on to the Ohio State University College of medicine and received his M.D. in 1988.  Dr. Hasinski completed his internship and his residency and internal medicine from 1988-1992 at Hahnemann University in Philadelphia and then stayed on to complete his fellowship in endocrinology and metabolism from 1992-1994.  After his training he joined a practice in suburban Philadelphia before moving to Indianapolis to join a large endocrinology practice from 1994-1996. Dr. Hasinski was subsequently recruited by the Division of Endocrinology and Metabolism at Hahnemann University in Philadelphia as an associate professor of medicine and fellowship program director from 1996-2001.  Dr. Hasinski was then recruited to join Arizona Endocrinology in Glendale, Arizona in 2001.

He has maintained strong ties to academic medicine via the Midwestern University in Glendale Arizona teaching medical students and residents.  His special interests include thyroid disorders and diabetes mellitus.  His outside interests include travel, photography, jogging, cultural events and his dogs.

Start a telemedicine call with